In the early 1980’s, a pair of grad students at Iowa State University, John Logel and Calvin Cumerlato, did some reflection surveys with one of Geometrics’ seismographs, the ES-1210F (1). The Nuclear Regulatory Commission funded them to buy the equipment and do the work. The sections were relatively deep by near-surface standards, mapping a number of faults. Then, as now, the NRC was interested in potential earthquake faults. You can read the full report on Iowa faults, and see the seismic sections in the report’s appendix (2). Calvin wrote a second report (3) on the acquisition and processing process. At the time, this was really innovative work in the evolution of reflection seismic done with engineering seismographs. Some faulting is visible in this section.

We at Geometrics were delighted! Only a handful of researchers were doing high-resolution reflection surveys in this period. They gave us a copy of one of the sections, and we liked to show their it to potential customers as an example of the capability of our instrument.

Both students graduated. John Logel went over to the dark side and took employment in oil and gas. He actually came by a couple of years ago to thank me for the support we had provided in his student days. I didn’t remember any special effort, but I thanked him.

Calvin Cumerlato on the other hand, took a near-surface job with the U. S. Bureau of Mines. He did some innovative work on blast effects and coal seam reflections. You can find some of his papers by searching for Cumerlato in the SEG Library.

Back when San Fransisco was a different city, and the SEG was less antagonistic towards California, the annual meeting would occasionally come to our area. Geometrics traditionally chartered one of those tourist sightseeing boats and gave our customers an evening cruise, while plying them with food and adult beverages. We even sent a bus disguised as a cable car to the convention hotels, to ferry the customers to and from Fisherman’s Wharf. Those were good times.

We handed out tickets from our booth to customers and friends. Calvin came by the booth to greet us, and I naturally invited Calvin to come on the boat ride, handing him a ticket. Calvin was new at the Bureau (which was probably why he got to attend the convention), and had just received “the lecture” explaining how federal employees were expressly forbidden from accepting anything of value from a company doing business with the government. Acceptable gifts were items like a “cup of coffee” or a “ball-point pen”. I assured Calvin that nobody would know if he went on the boat ride. He said that there might be some other government employees on the boat who would report him. I pointed out that if they were on the boat, they couldn’t say anything, but he sadly handed back the ticket.

Later, on the boat ride, chatting with Bob Ballard (whom many of you knew) and a couple of other government geophysicists, I related this sad story. Bob, with his usual wisdom, said “the trouble with Calvin is he doesn’t know a ball-point pen when he sees one”. We all laughed of course. Both Bob and Calvin are gone now and safe from any reparations. Bob, who I counted as a friend, had a long and distinguished career with the Army Corps of Engineers (4). Calvin did some excellent research, but could have done more in a different organization.

Doug Crice got his start in earthquake research in 1972, measuring fault slip in California. He was co-founder of Nimbus Instruments in 1971; president and chief design engineer. Nimbus was acquired by Geometrics in 1978 to extend their product line beyond radiometrics and magnetometers. He was product manager for the seismograph line, and eventually vice president of marketing. He started Geostuff in 1991 as a sideline hobby business, building products essential to the seismic market, but where the annual volume was too small for a real company. During his career, he was responsible for many innovations in instrument design that contributed to geophysics.

A dialogue with Dwain Butler

A dialogue with Forrest Sim

A dialogue with Adriana Ocampo

A dialogue with Ron Bell 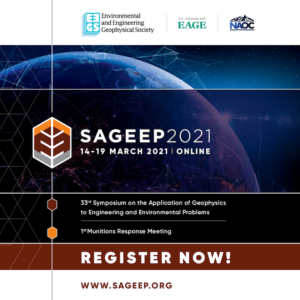